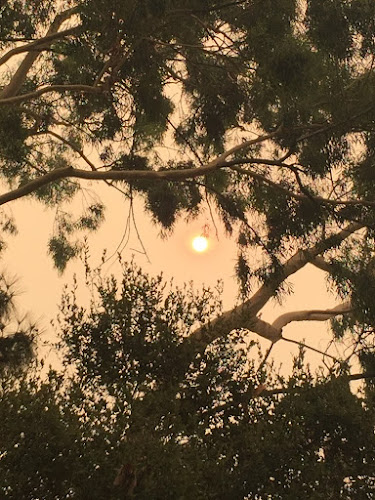 Yesterday morning the smoke was so thick it permeated our house and was much worse outside.  This is yesterday's morning sun framed by eucalyptus branches.  Thankfully, the air cleared by late afternoon and we actually saw blue sky! The sky was clear enough to see the huge tanker jets making their east over the fire area and then circle back.  The fire has been burning since September 6 and has burned over to Chantry Flat.  The fire is only 6% contained and is going to be with us for a while.  Thankfully, we have had a break in the super hot weather and the highs this week are supposed to be near 90 or a little above.  That's a bit higher than the historic average September highs for Pasadena, which is 89.
Posted by Michael Coppess at 8:41 AM No comments: 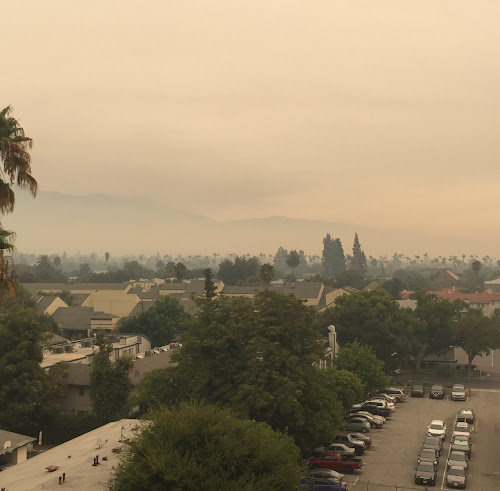 View looking toward East Pasadena taken from the office building at Colorado and Wilson.  The smoke has been exceptionally heavy particularly in the morning.  Smells like a camp fire.  This photo looks like an old time sepia.  Unfortunately, the photo is untouched.  To the right, I have reprised a post I did about the Chantry Flat fire that occurred in 2008 and threatened East Pasadena.
Posted by Michael Coppess at 2:13 PM No comments: 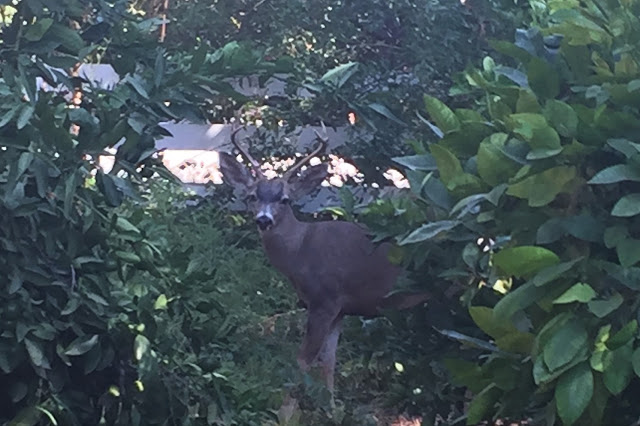 Seems every year here in Northeast Pasadena we get a surprise or two.  This summer it was deer.  For the first time in our experience, we have had deer visit the yard.  I have seen this buck maybe half a dozen times  I have seen him on his own. I have also seen him with a smaller buck and, I think, have seen a doe with him too.

They are beautiful very graceful animals and seeing them has been fun.  I think mostly they have chosen our yard as a shady spot to lie down under the trees.  But, I have seen them move too and this guy can bound over our fence with no effort at all.  Thus far they have done minimal damage. But, I have seen them eating the leaves off our fruit trees and our apple and young avocado have branches that the deer have stripped to the nub.  So, as fun as they are to watch, I have taken to moving the deer along when I see them in the yard.

I would say bear activity in our neighborhood has been less than in recent years.  Late spring we had a bear cub break through a screened vent and crawl under our porch.  The bear eventually left and the screen was fixed.  We haven't had any problem since.

Of course, when we first moved here, we did not have any bears around.  We kept chickens, had a small apiary and enjoyed fresh eggs and honey.  We took measures to protect the chickens from coyotes, but did not give bears a thought.  I have posted here about our experience with bears, which reached a low point in 2012 when a bear got into the pen and ate our chickens.    A year earlier, I watched as a bear took out our apiary.    So, we do not have any bees or chickens now. But, we do think about getting chickens again.

Some other wildlife highlights from the summer:

Twice this summer, I saw a hawk swoop down not more than 10 yards away from me.  I have had this happen here before.  It is thrilling to see a hawk glide downward, ready to grab its prey, and then flap its wings and rocket right back up in the air.

About dusk one night, as I walked by a large bush in the yard, I heard a faint rustle of leaves.  That's usually a lizard scurrying away, so I stopped and waited to see the lizard. But, there was no lizard.  Instead, I watched as, on the opposite site of the bush from me, a bobcat very quietly exited from under the bush and calmly walked to the fence, jumped up on the fence and then disappeared into the neighbor's yard.  We have seen bobcats here before, but it is rare and always super exciting.

I have posted before about alligator lizards, which I always find fun to watch.  This summer's pandemic has put me in the yard a lot and I have a few new lizard experiences.  The best was two days ago.  I watched as an alligator lizard slithered out of some tall weeds and went nose down into a patch of freshly weeded dirt. The alligator flailed around in the dirt for a moment and emerged with an earthworm wiggling from both sides of its mouth.  Naturally, when I got my phone out to take a picture, the camera-shy alligator scurried away.

We have also seen and heard from the usual wildlife. We've heard the owls and coyotes (but not seen either).  I see a rabbit or two every morning and there are the squirrels, parrots and tons of doves we also see daily.  But, the real news this summer is the deer.

Posted by Michael Coppess at 5:00 PM No comments: 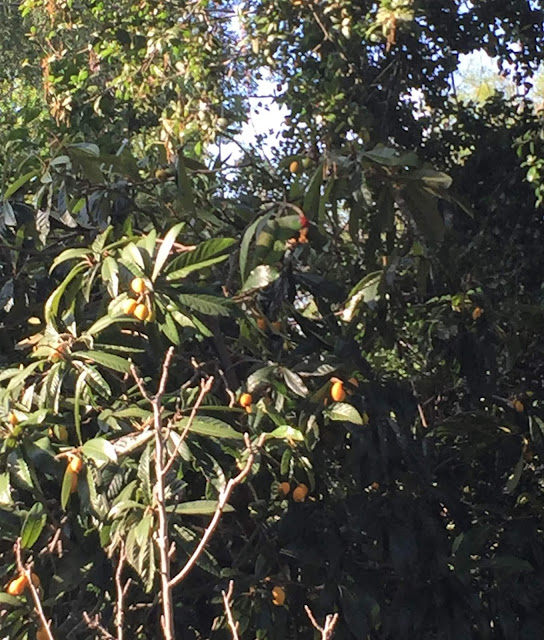 This weekend a couple of red-crowned parrots flew into our loquat tree.  A clearer photo of a red-crowned parrot in a loquat tree is at socalparrot where there is also some good parrot info.  For example, our local parrots have not displaced native birds or damaged habitat for native species.  The reason is the parrots do not eat our native plants but rather the non-native plants (like loquats) that we grow in abundance in parts of southern California.
Posted by Michael Coppess at 10:22 AM No comments: 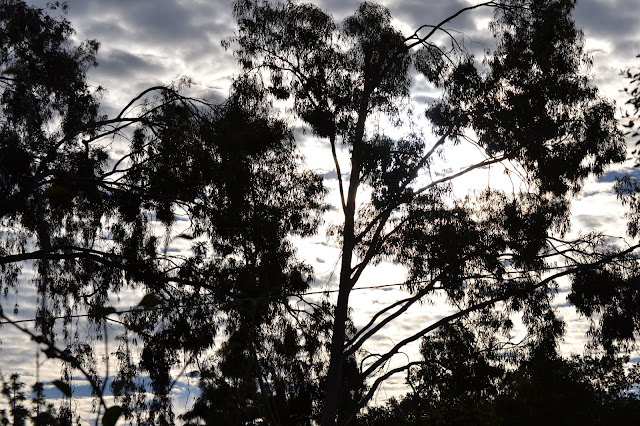 Posted by Michael Coppess at 11:45 PM No comments: 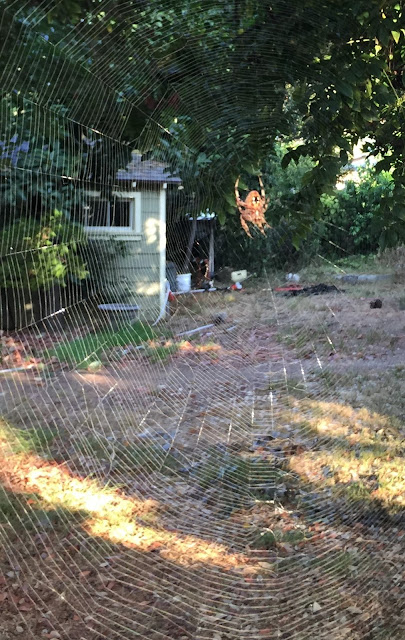 This morning from 30 yards away, I saw this big orange spider seemingly hanging in mid-air.  When I got closer, the sun was just right and the spider's web came into clear view.  The detail on the web and the sheer volume of work required to create it is amazing. 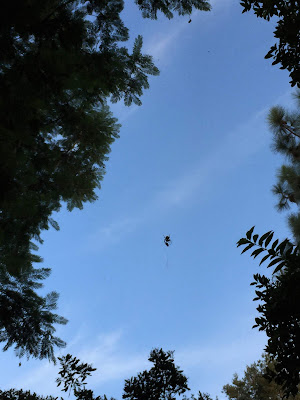 Here is the same spider in the same general location a few days earlier.  Here it is hanging about five feet higher than it was this morning and the backdrop is blue sky rather than trees.   If you look closely, you can see that the spider has spun a web around its dinner.
Posted by Michael Coppess at 6:52 PM No comments: 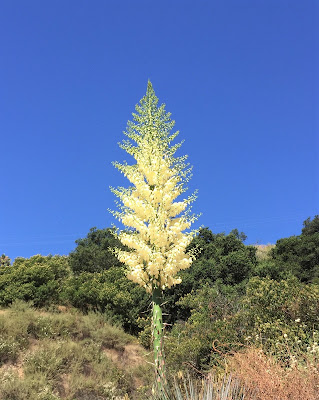 You do not have to walk far into the local mountains to see one of these.  The bright flowers on these Spanish Bayonets stand out against the generally brown-green landscape.   It takes five years to produce a mature plant that flowers like this.  After flowering, the plant dies. These photos were taken on my hike a couple weeks ago through Eaton Canyon up to Henniger Flats. 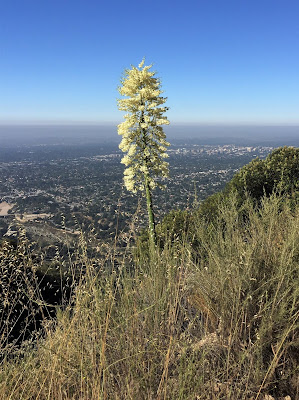 The plant goes by many names -- Spanish Bayonet, Our Lord's Candle, Foothill Yucca and Quixote Yucca and Chaparral Yucca -- all of which make sense when you see the plant.   The botanical name, Hesperoyucca Whipplei, needs explanation.

The species is named after Ameil Weeks Whipple.   An Army engineer, in 1856, Whipple was ordered to lead an expedition from Little Rock, Arkansas to Los Angeles to plot a railroad route along the southern part of the country.  Whipple surveyed a route that that traversed Oklahoma, Texas, New Mexico, Arizona and California, which route was later used for the famous Route 66.  After his expedition, Whipple surveyed the Mexico-US border and then worked to improve naval navigation through New Orleans and the Great Lakes.   When the Civil War started in 1861, engineer Whipple created maps that guided Union forces into battle and provided Union generals reconnaissance by going up in hot air balloons that floated across Confederate lines. He also fought in the battles of Fredricksburg and Chancellorsville, where he was mortally wounded by a Confederate sharpshooter.   He died in 1863 with the rank of Major General. He was 44 years old.
Posted by Michael Coppess at 8:50 PM No comments:

Smoke over rooftops is a scary site in southern California foothills. This smoke is from the fire that broke out about 2 pm today at Cha...