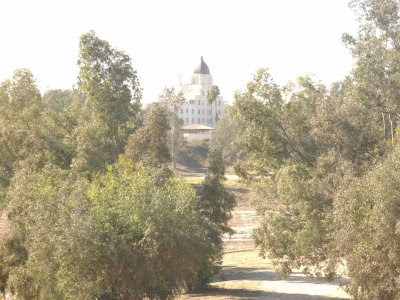 In 2009, you're going to hear a lot about St. Luke's. At Monday night's City Council meeting, DS Ventures will present its plans to develop the 13- acre property by converting the existing St. Luke's hospital building to an assisted living facility, and adding to the site 170 new condominium units, parking structures and a 50,000 square foot office building. The Council meeting is informational only -- to inform the council and public that a major project is being proposed. No decisions will be made. You can see the city staff report here. A site plan for the project, showing the existing and proposed new buildings, is attached to the city staff report.


Above is a view of St. Luke's Hospital as seen from New York Drive. That's Eaton Wash Reservoir in the foreground. The hospital was built in 1933 by the Sisters of St. Joseph and served our area's medical needs until it closed in 2002. This magnificent seven story Art Deco building is one of the most impressive landmarks in East Pasadena. Only the Stuart Pharmaceutical building rivals it.


In 2003, St. Luke's was sold to Cal Tech. Many were relieved that the future of this property was in good hands. The St. Luke's property is (and has always been) zoned for Public Service uses. Though the hospital was closed, Cal Tech would continue the historic Public Service use of the property by using it for education and research. 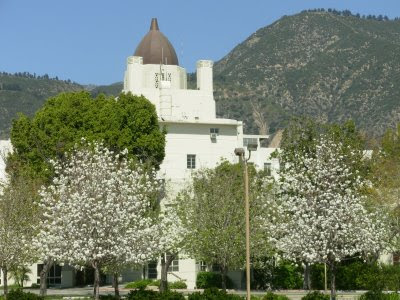 But, St. Luke's is located near the base of the San Gabriels, five miles from Cal Tech's campus. The location proved too remote from Cal Tech's main campus near downtown Pasadena. The venerable institution decided to sell and the property went on the market.


Developers salivated over the possibilities. Built-out Pasadena rarely sees a 13-acre parcel go on the market. And this was about 2006-2007. Developers were making bundles cranking out condominiums. As reported by Pasadena Now, Cal Tech's real estate broker called St. Luke's "an extraordinary assemblage of property" and said the property "generated interest from investors around the world."


Others were interested in the property too. Schools, churches, a cancer research center and other nonprofit users were interested. After all, the St. Luke's property was zoned for Public Service use and one might think it would be sold to another institutional user.


It may have been the irrational exuberance of the times or the mesmerizing image of acres of condos or just arrogance, but developers ignored the city's General Plan and zoning laws and lined up to bid on the property. Institutional users were priced out of the game. According to an October 2007, Los Angeles Business Journal article, in 2003 Cal Tech paid less than $20 million for the St. Luke's property. Four years later, it sold the property to Beverly Hills developer DS Ventures for more than $40 million.


Pasadena's General Plan requires the city's growth to be limited to the city's downtown and along major transportation lines, such as the metro. This is the centerpiece to the city's growth plan -- a plan the city is fulfilling with dense development downtown and at metro stops. By aligning growth with public transportation and focusing it downtown, the city will hopefully reduce the need for cars, reduce pollution and make more efficient use of dwindling resources.

Based largely on our General Plan, our city is nationally known for progressive planning. The basics of the city's current General Plan were adopted back in 1994 as part of a campaign to "Imagine a Great City." Citizens turned out by the thousands to do just that. Guided by this guy and others, the city adopted a forward thinking General Plan that limits growth to targeted areas. It was cutting edge stuff at the time and put Pasadena planning at the forefront of the move away from auto-dependence and toward smarter growth.


So, in addition to doing away with the property's Public Service zoning, to carry out its plan to intensify use on the site, adding condos, parking structures and office uses, DS Ventures will need to convince the city to back away from the key to its General Plan. That may be tough to do.

The fact is the St. Luke's property is on the edge of the city, miles from downtown and miles from a metro stop. DS's plans to develop the property are out of touch with Pasadena's plan to target and limit growth and a hindrence to state and local efforts to reduce auto trips and emissions. With every day's news, it becomes more and more evident that we need to stop building for auto dependence and need to exercise greater care about how we affect our environment. The wisdom of Pasadena's plan to limit growth to targeted areas is proving more and more sound.


How will this all play out? Well, as I said at the start, in 2009, I think we're going to hear a lot about the St. Luke's property. Hopefully we'll also hear a lot about the City's General Plan, the need to reduce auto use and emissions and ways to better conserve our environment. In the process, we will learn much about Pasadena's commitment to remain an environmental and planning leader.
Posted by Michael Coppess at 7:39 PM

Pardon my ignorance, but what is the Stuart building?

The Stuart Pharmaceutical building is a Pasadena landmark and is listed on the National Register of Historic Places. It is on Foothill and Sierra Madre Villa. The building is now part of the Stuart apartments, but you can still walk inside the lobby area. It is impressive and the walls are loaded with photos of the building in its heyday. To me, St. Lukes and the Stuart Pharmaceutical building are the standout historic landmarks in East Pas. But, there are other landmarks out here, and I'd be interested in hearing what others think are most significant historic assets in East Pas. Anyway, thank you for the question.

Sorry, of course I know which building that is. Once you used the word "Pharmaceutical" it all came into focus. Must be the drugs.

Tonight's council meeting will be televised live on 55 and via streaming video.

I sorely miss having a hospital there. I was born there. And St. Lukes' proximity to my home probably saved my life when I had an emergency appendectomy there at 4am. Don't we need another hospital?

Docker, it's the pharmaceuticals.

Anonymous: we need another hospital. Specifically, one north of the 210 freeway.

Please answer a question that I have-

I was told by someone that St. Luke Hospital was closed due to "abortions" being done to their patients, mainly hispanics.

I was shocked to hear this, since I had worked at the hospital and done my training there in the late 60's.
I cannot find any articles supporting this claim or misinformation.

Hoping you can give me an answer to this shocking question. I remain to have fond memories of working at the hospital and the patients I so lovingly helped.

To Annon: In 2002 or 2003, when the hospital closed, it was owned by Tenet Healthcare. Press reports at the time said closure was due to declining use. I don't recall reading anything else. Incidentally, many people have fond memories of St. Luke's and many locals were born there. I've been surprised at the number of people who find this blog through searches for St. Luke's Pasadena.

Barn next door to daniel webster school? Why? Who owned this farmland? Or was this a reproduction?

My brother and I were both born there. I remember seeing a newspaper article a number of years ago where St. Luke's had a "birthday party" for anyone born at St. Luke's. Unfortunately I heard about it after the fact and wasn't able to go. I'd love to find a copy of the newspaper article again.

I was born at St. Luke's too. It's sad to hear it was closed. Even sadder to hear that Cal Tech sold it to a venture company for the highest bid, in order to turn a big profit.

I hope the people and cit of Padadena stick to their guns and don't permit this historic site to be developed and filled with condominiums and parking structures.

I would like to see the city oppose and block their plans, and i wouldn't lose any sleep if the venture company had to sell it at a loss to an institutional non-profit, like the schools, churches or research centers which were interested.

I was also born at St Lukes. Does anyone know where all the hospital records are stored? I am looking for a copy of my hospital foot print record. eplo2005@yahoo.com

I was also born at St. Luke's in 1947. My birth certificate says it was in Altadena. I heard that Pasadena annexed this property from Altadena. Does anyone know if this is true & if so what year did it occur?
Sheryl

It's a Catholic hospital, how could that be?

I need to obtain records on my father that passed away in 1992 at the hospital. Does anyone know where to start?

I was born at St. Lukes in April of 1964, as was my sister in July of 1967. Although I haven't lived in California for some time, I still have family in Pasadena and would be very upset if it gets destroyed by developers. I'd also like to know if anyone knows where the hospital records are kept. EMAIL:jblakeslee@mindspring.com

My sister and i were both born there also. She was born on August 21, 1949, and i was born on December 27, 1945. Our records have always shown Altadena, so i am also curious as to if and when it was annexed to Pasadena.

I sure would like to find the old patient records from the last half of 1950 !
I was born there. Mom had a hard time. Need more information !

Awesome finding this web site while researching as I am another person born at St. Luke Hospital in 1968. I took some pictures of the art on the buildings today. I asked my father about the doctor who delivered me and received some information and insight which was really cool! I too, want to make sure it is preserved. We can't have every single thing new in our time can we? A nice blend of old and new in the city brings style.

I was born there in Nov '48. My birth certificate gives "Altadena" as my place of birth. My sister was born there 3 years later (Feb '52) Her POB is "Pasadena".

Smoke over rooftops is a scary site in southern California foothills. This smoke is from the fire that broke out about 2 pm today at Cha...